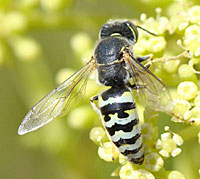 The fauna of the Emirates, as for most countries, is dominated by the phylum Arthropoda, in terms of the numbers of both species and individuals. Amongst the arthropods, the insects are by far the most numerous, but other interesting groups occur, including true spiders, camel spiders, scorpions, pseudoscorpions, ticks, centipedes and isopods or woodlice. All available major habitat types in the UAE have their own insect populations, together with at least some representatives of other arthropod groups. Even in the desert, close observation reveals much invertebrate life.

In well-vegetated habitats, such as coastal sand dunes, gravel plains, wetlands, irrigated plantations and mountain wadis, the diversity of the invertebrate wildlife is readily apparent even during daytime, with butterflies and moths, grasshoppers, mantids, ants and numerous beetles, both large and small, as well as myriads of flies, wasps and bees.

Species of the day